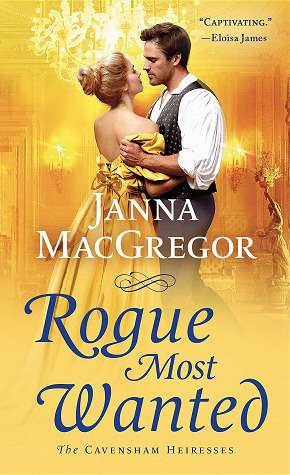 I received a copy of Janna MacGregor’s Rogue Most Wanted through Historical Fiction Virtual Book Tours. As always, this review reflects only my honest thoughts on the book. Rogue Most Wanted
by Janna MacGregor

Wanted: an engagement of convenience. Found: A noble suitor.

Raised on a remote Scottish estate by her adoring grandfather, Lady Theodora Worth has inherited an earldom as well as the land itself. But when an upstart duke challenges her claim to the title and the Ladykyrk estate, Thea is suddenly in need of a husband—in name, at least. An elderly neighbor with a thoroughly modern sensibility and a dashing great-nephew just might be the answer to Thea’s prayers. Except she has no intention of marrying the first man she meets. That would be utterly ridiculous.

Lord William Cavensham is entirely too devoted to his family’s estate—ever since he was jilted as a lad–to wed, but he agrees to meet the woman his aunt has taken under her wing—and introduce her to possible suitors. But after just one meeting with beautiful, spirited Thea, Will is determined to help her reclaim her title. And even moreso, he can’t stop thinking that perhaps marriage to this bold, passionate woman may be the one thing he’s been missing all along?

First thing’s first: I spent the last six pages of this book teary-eyed after Will’s gift.

But, I’m getting ahead of myself!  In the interest of complete honesty, it took me a little while to really get into this book.  I struggled a bit in the first hundred or so pages.    There were only so many times I could read a variation of “but we’re just friends” before wanting to hit my head against the wall!

That being said, it was frustrating, but not enough to make me give up on Rogue Most Wanted.  In fact, it had made me all the more frustrated on behalf of the characters.  I could feel Stella and Edith’s exasperation as they tried to play matchmaker, primarily because everyone else could see it wasn’t the case.

By about the halfway point of the novel, though, I was hooked.  Steamy scenes between Thea and Will quickly picked up—at least the two would recognise their blatant physical attraction!  Of course, as Thea’s prospects of resecuring her place as Countess of Eanruig and mistress of Ladykyrk grow bleaker, one has to keep reading to see if their developing relationship can withstand it.

Similarly to my recent reading of Project Duchess, one aspect of Rogue Most Wanted that absolutely captured my heart (as well as Thea’s) is the relationships between the Cavensham couples.  This is the first book I’ve read of the Cavensham Heiresses series, and despite allusions to courtships past (and those to come in book six!), it worked quite well as a stand-alone read.  As Thea notes, “Their love for one another is apparent to all.  They’re simply beautiful” (233). Between the couples and the family at large, it’s clear that Cavenshams truly love deeply and completely (or, should I say, “decidedly” and “thoroughly committed”).

Just as Will and his family love each other so dearly, Thea’s love for her late grandfather and for Ladykyrk and its tenants shines. We only get glimpses into the relationship she and the late Duke shared, but it’s clear that he doted on her and they shared an incredible bond.  And her tenants’ adoration of her is obvious—Thea is immediately set up as a character we should root for, despite her own belief in some inherent flaws (largely fueled by The Midnight Cryer‘s gossip).

At the same time, though, so is Will.  In this respect, I almost wish this book had a different title;  Will is far from a dishonest or unprincipled rogue. In fact, even The Midnight Cryer proclaims him unworthy of anyone who’s anyone wanting him.  Thea, perhaps, could be considered a sort of female rogue—and her having her title in her own right could support the association to a more masculine-connotated term.

With that in mind, though, one definition of “rogue” sticks out—”remove inferior or defective plants or seedlings from (a crop).”  With that in mind, you get into Will’s and Thea’s minds as you examine the title:  helping his family run the estates, an agricultural reference wouldn’t be unlikely for Will, and he certainly sees himself as inferior, as unworthy of love after a long-past jilting.  All the same, Thea wants him terribly—even as she turns away, she admits she wants him more than anything, and that losing him would be the worst possible sacrifice, save losing Ladykyrk and disrespecting her grandfather’s wishes while ruining the tenants’ livelihoods.

So, while it took a bit more thought, I came to change my mind even on the title—the obvious understanding of it may not apply to Will, or even to Thea, but it does work, and quite well, in fact.

As a whole, I did enjoy reading Rogue Most Wanted, despite my early hesitations. In fact, the relationships between not only Will and Thea, but the other Cavensham couples, might just force me to get my hands on others from this series.  I can’t help but want to read more about Claire, Emma, March, and even Avalon’s stories!

Praise for Rogue Most Wanted

Janna MacGregor was born and raised in the bootheel of Missouri. She credits her darling mom for introducing her to the happily-ever-after world of romance novels. Janna writes stories where compelling and powerful heroines meet and fall in love with their equally matched heroes. She is the mother of triplets and lives in Kansas City with her very own dashing rogue, and two smug, but not surprisingly, perfect pugs.

Wednesday, June 26
Review at Bookish Rantings
Review at So Many Books, So Little Time

Friday, June 28
Feature at Broken Teepee
Review at View from the Birdhouse

Monday, July 1
Excerpt at The Lit Bitch
Review at To Read, Or Not to Read

Wednesday, July 3
Review at Curling up by the Fire
Excerpt at Myths, Legends, Books & Coffee Pots

Friday, July 5
Feature at What Is That Book About
Review at For the Sake of Good Taste

During the Blog Tour, we are giving away two paperback copies of Rogue Most Wanted by Janna MacGregor! To enter, please use the Gleam form below.

– Giveaway ends at 11:59 pm EST on July 5th. You must be 18 or older to enter.
– Giveaway is open to US only.
– Only one entry per household.
– All giveaway entrants agree to be honest and not cheat the systems; any suspicion of fraud is decided upon by blog/site owner and the sponsor, and entrants may be disqualified at our discretion.
– The winner has 48 hours to claim prize or a new winner is chosen. One Reply to “Rogue Most Wanted by Janna MacGregor: Review”