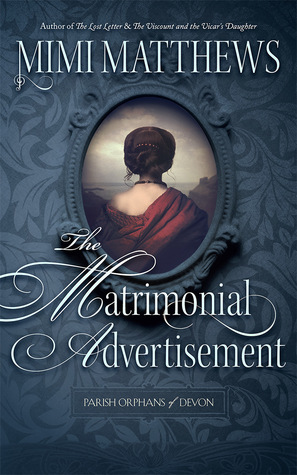 I received an ARC of Mimi Matthews’ The Matrimonial Advertisement through Historical Fiction Virtual Book Tours for review purposes. As always, this review reflects only my honest opinions on the book. 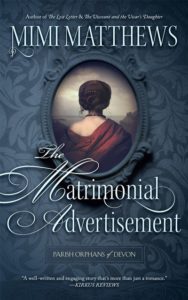 ABOUT THE MATRIMONIAL ADVERTISEMENT:

Helena Reynolds will do anything to escape her life in London, even if that means traveling to a remote cliffside estate on the North Devon coast and marrying a complete stranger. But Greyfriar’s Abbey isn’t the sort of refuge she imagined. And ex-army captain Justin Thornhill—though he may be tall, dark, and devastatingly handsome—is anything but a romantic hero.

Justin has spent the last two decades making his fortune, settling scores, and suffering a prolonged period of torture in an Indian prison. Now, he needs someone to smooth the way for him with the villagers. Someone to manage his household—and warm his bed on occasion. What he needs, in short, is a wife and a matrimonial advertisement seems the perfect way to acquire one.

Their marriage was meant to be a business arrangement and nothing more. A dispassionate union free from the entanglements of love and affection. But when Helena’s past threatens, will Justin’s burgeoning feelings for his new bride compel him to come to her rescue? Or will dark secrets of his own force him to let her go?

I’ve been very picky about my book choices as of late, but I’m almost always down for a good historical romance (my love of Philippa Gregory’s Tudor-era novels should make that pretty clear!). I was unfamiliar with Matthews’ work before joining this blog tour, but I can confidently say that I’m very much a fan since reading The Matrimonial Advertisement.

The book quickly drew me in with a Victorian-era setting on the coast of England. If you’re new to the blog, I lived in Somerset for a time and miss it terribly. Books might be the easiest way to get myself there until I’m able to return! I don’t think I’d have disliked the novel if it took place elsewhere, but I loved it all the more for this aspect.

What really kept me intrigued, though, was The Matrimonial Advertisement’s characters and their mysterious individual backstories. Why is Helena so afraid? What dark secrets have forced Justin to put such emphasis on his gruff exterior? Beyond that, what secrets are they keeping from one another from the moment they meet? Matthews brings these questions to light time and again, giving both characters and readers a bit more insight each time around.

Alongside these protagonists, The Matrimonial Advertisement features a cast of supporting characters that keeps you just as intrigued as the couple. From Helena’s longtime companion, Jenny, to the various characters at Greyfriar’s Abbey, I found myself as interested in the supporting cast as in the novel’s stars. Fortunately, the more interested I grew in these other characters, the more I could remind myself that this is the first of the Parish Orphans of Devon Series. There are more stories to come! I’m already excited about 2019’s Book 2, A Modest Independence.

WHERE CAN I GET A COPY?

Praise for The Matrimonial Advertisement

“Matthews’ (The Pug Who Bit Napoleon, 2018, etc.) series opener is a guilty pleasure, brimming with beautiful people, damsels in distress, and an abundance of testosterone…It’s a well-written and engaging story that’s more than just a romance. The author chooses to draw on dark moments in British history to create Justin’s and Helena’s complicated pasts…It’s an unexpected narrative addition that works well, as Matthews seamlessly blends some grim history with light and frothy fiction. An enjoyable love story that dares to dip a toe into bleak social and political history.” -Kirkus Reviews

“I don’t have enough words to say how unbelievably incredible this book is…I am a huge fan of Ms Matthews, her writing is always flawless and articulate, but this simply is in a league of its own… ‘The Matrimonial Advertisement’ is a lot darker that what we have come to expect from Ms Matthews, but for me this is Gothic Victorian story-telling at its best. This is how this genre is supposed to be written!…Ms Matthews has out done herself with this, by far one of the best books I have read–ever!…This is a hauntingly beautiful, gripping and heart-wrenching story. It is simply spellbinding!” -Chicks, Rogues and Scandals

“This is an irresistible romance with the added frisson of gothic fear. At a time in Victorian Britain when a woman belonged entirely to her father, guardian or husband, can Helena ever be free to love and live as she wishes? Mimi’s writing style is engaging, and we are plunged immediately into Helena’s predicament. Secrets are gradually revealed, adding depth to our understanding of the main characters. This is Miss Matthews’ best book so far and it is only the first in a new series!” -Lizanne Lloyd, Lost in a Good Book

“This delightful Victorian love story took me away to another time and another place for a few blissful hours. Mimi Matthews is a wonderful storyteller. She creates very likeable, memorable, layered characters that quickly feel like friends. Her style is naturally elegant and warmly flowing, full of historical detail and charm…this is the second of her fictional works that I’ve devoured and I’m looking forward to more.” -Jayne Fresina, bestselling author of Once Upon a Kiss

“Since I first read the sample chapters, I’ve been eager to read this book. Mimi Matthews does not disappoint. She lures the reader in for an emotional journey. Full of romance and heart, The Matrimonial Advertisement takes a marriage of convenience, a pinch of Beauty and the Beast, and some truly engrossing social history and brings to life a satisfying romantic tale. I look forward to more from this talented author!” -Lena Goldfinch, bestselling author of The Unexpected Bride

“The Matrimonial Advertisement is a Victorian romance in all its glory…Mimi Matthews definitely knows how to present historical facts effectively and without sounding bookish…a delightful treat for Jane Austen and historical fiction fans.” -Readers’ Favorite, 5-Stars

Mimi Matthews (A Victorian Lady’s Guide to Fashion and Beauty, The Lost Letter) writes both historical non-fiction and traditional historical romances set in Victorian England. Her articles on nineteenth-century history have been published on various academic and historic sites, including the Victorian Web and the Journal of Victorian Culture, and are also syndicated weekly at BUST Magazine. In her other life, Mimi is an attorney. She resides in California with her family, which includes an Andalusian dressage horse, two Shelties, and two Siamese cats.

Tuesday, September 4
Review at Passages to the Past

Thursday, September 6
Review at Based on a True Story

Friday, September 7
Review at A Chick Who Reads
Feature at What Is That Book About

Monday, September 10
Feature at The Lit Bitch
Review at For the Sake of Good Taste

Tuesday, September 11
Feature at To Read, Or Not to Read

Friday, September 14
Feature at Maiden of the Pages

Tuesday, September 18
Feature at A Holland Reads
Review at Library of Clean Reads

During the Blog Tour we will be giving away a signed copy of The Matrimonial Advertisement! To enter, please enter via the Gleam form below.

– Giveaway ends at 11:59pm EST on September 18th. You must be 18 or older to enter.
– Giveaway is open to US residents only.
– Only one entry per household.
– All giveaway entrants agree to be honest and not cheat the systems; any suspect of fraud is decided upon by blog/site owner and the sponsor, and entrants may be disqualified at our discretion.
– Winner has 48 hours to claim prize or new winner is chosen.

One Reply to “Book Review: The Matrimonial Advertisement by Mimi Matthews”