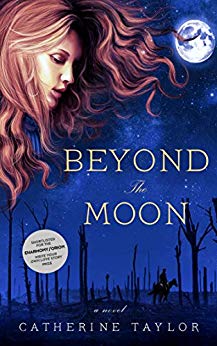 I received a copy of Catherine Taylor’s Beyond the Moon through Historical Fiction Virtual Book Tours for review purposes. As always, this review reflects only my honest thoughts on the book. Beyond the Moon
by Catherine Taylor

Outlander meets Birdsong is this haunting debut timeslip novel, where a strange twist of fate connects a British soldier fighting in the First World War and a young woman living in modern-day England a century later.

In 1916 1st Lieutenant Robert Lovett is a patient at Coldbrook Hall military hospital in Sussex, England. A gifted artist, he’s been wounded fighting in the Great War. Shell shocked and suffering from hysterical blindness he can no longer see his own face, let alone paint, and life seems increasingly hopeless.

A century later in 2017, medical student Louisa Casson has just lost her beloved grandmother – her only family. Heartbroken, she drowns her sorrows in alcohol on the South Downs cliffs – only to fall accidentally part-way down. Doctors fear she may have attempted suicide, and Louisa finds herself involuntarily admitted to Coldbrook Hall – now a psychiatric hospital, an unfriendly and chaotic place.

Then one day, while secretly exploring the old Victorian hospital’s ruined, abandoned wing, Louisa hears a voice calling for help, and stumbles across a dark, old-fashioned hospital room. Inside, lying on the floor, is a mysterious, sightless young man, who tells her he was hurt at the Battle of the Somme, a WW1 battle a century ago. And that his name is Lieutenant Robert Lovett…

Two people, two battles: one against the invading Germans on the battlefields of 1916 France, the other against a substandard, uncaring mental health facility in modern-day England. Two journeys begun a century apart, but somehow destined to coincide – and become one desperate struggle to be together.

Part WW1 historical fiction, part timeslip love story – and at the same time a meditation on the themes of war, mental illness, identity and art – Beyond The Moon sweeps the reader on an unforgettable journey through time. An intelligent read, perfect for book clubs.

Praise for Beyond the Moon

“A poignant and stirring love story… Taylor’s accomplished, genre-bending book succeeds as a WW1 historical novel and a beguiling, time travel romance… The sharply written narrative deftly moves back and forth between the past and present.” — Kirkus Reviews

“A time travel romance, yet so much more than that. It is also an unflinching portrait of the horrors of war, and a look at the torturous extremes a human soul can endure. It is a sonnet to the transformative power of love, even as it is also a criticism of the futility and pointless destructiveness of war.” — Shaylin Gandhi, author of By The Light of Embers

When I started this novel, I didn’t think I’d be a fan, to be completely honest.  It took me a while to really get into reading it. But, once I did?  I needed to keep reading and to learn more.

Beyond the Moon has the features of a romance, but I’d hesitate to label it as one–this novel is so much more than the story of a couple.  The historian in me loved diving into the history, while my (utterly amateur) interest in psychology made those aspects all the more intriguing; I’ve done a lot of research into the Great War and shell shock, more specifically,  so this was right up my alley.

In addition, the book’s “supporting cast” (so to speak) was equally as enticing as its main characters.  By the end of the novel, I wanted to know more about so many other journeys, too.  As I write this, it’s not long since I put it down and I’m still speculating about who may have ended up with a happily ever after (and who did not).

This book is a bit long to finish in a sitting, but I’d recommend reading it in sessions as close together as possible–I ended up reading a bulk of Beyond the Moon within a few hours and it was all the easier to follow along with the novel’s parallel timelines. But, no matter what, I have no doubt that you, too, will be drawn into Robert and Louisa’s stories! Catherine Taylor was born and grew up on the island of Guernsey in the British Channel Islands. She is a former journalist, most recently for Dow Jones News and The Wall Street Journal in London. Beyond The Moon is her first novel. She lives in Ealing, London with her husband and two children.

Monday, December 9
Review at Passages to the Past

Wednesday, December 11
Review at 100 Pages a Day
Instagram Feature at Just a Girl and Her Books

Friday, December 13
Review at Reading is My Remedy

Saturday, December 14
Review at Books and Zebras
Feature at What Is That Book About

Wednesday, December 18
Review at A Chick Who Reads
Review & Excerpt at The Book Junkie Reads

During the Blog Tour, we are giving away two paperback copies of Beyond the Moon by Catherine Taylor! To enter, please use the Gleam form below.

– Giveaway ends at 11:59 pm EST on December 20th. You must be 18 or older to enter.
– Paperback giveaway is open to the US only.
– Only one entry per household.
– All giveaway entrants agree to be honest and not cheat the systems; any suspicion of fraud will be decided upon by blog/site owner and the sponsor, and entrants may be disqualified at our discretion.
– The winner has 48 hours to claim prize or a new winner is chosen.